Karvenheim launches tomorrow! In a little over 24 hours we’ll unleash a dwarf bonanza unlike any the world has ever seen. The bonanza starts right here, right now though folks, because today we want to show you not one, but three of the campaign’s stretch goals!

So far the stretch goals we’ve revealed have all been buildings and townsfolk character miniatures, but we’ve been a little stingy on the army side of things. What does Karvenheim offer for those of you who are less interested in architecture, and more interested in charging headlong into a swarm of goblins brandishing a variety of pointy objects? Well, aside from the 36 awesome dwarf army miniatures included in the core collection, we have these...

No, your eyes don’t deceive you (although we can understand why they might be difficult to spot) – this really is a band of elusive dwarf rogues. These are the Shadowcleavers, a rare breed of Stonebreaker dwarf that excels at protecting Karvenheim’s interests by stealth and guile. If you watch very patiently, you may see them slipping between the shadows of the Grand Bhazilika’s colossal bell towers, the better to keep a watchful eye on the town’s comings and goings – and to let loose an arrow if the need arises.

Another stretch goal that we hope to unlock is this very imposing unit of Boaragnarok Ironhelm Linebreakers. These veteran dwarf warriors are a more elite version of the Boaragnarok Chargers included in the campaign’s core collection, having fought honourably and tenaciously in a decades-long conflict known as The War of Barragni’s Foot. 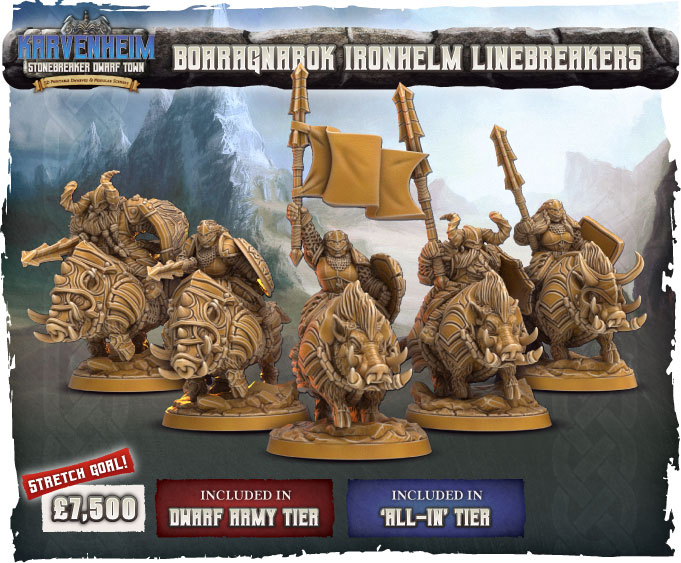 All of these mighty warriors need weapons and armour of course, and these are forged in Karvenheim’s many blacksmiths, known as ‘old dwarven smithies’ for the very ancient and very particular smithing technique that has been passed down in dwarf society for generations, and never once shared with outsiders. This particular example is the property of Bhurt Mantlehand and, while its name in dwarfish means ‘licensed smelter and smith’, the literal translation in the common tongue is ‘he who smelt it’. To this day Bhurt has no idea why the human traders that occasionally pass through town can’t stop giggling. 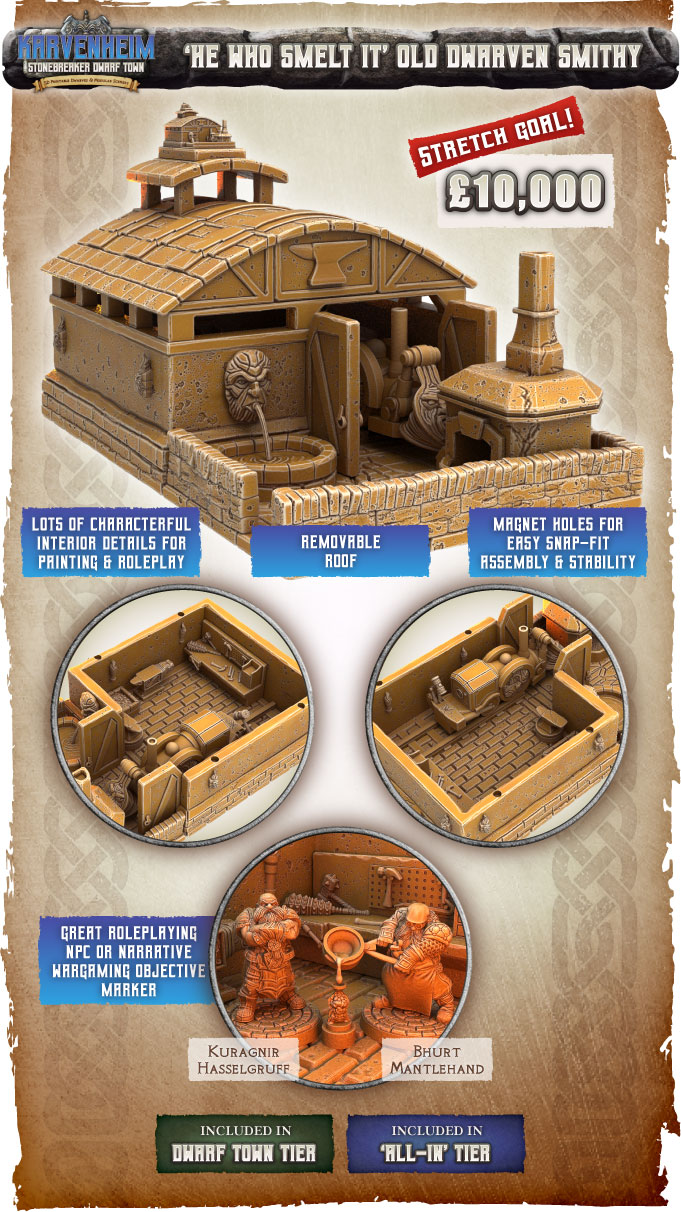 We have even more stretch goals to unveil and unlock over the course of the campaign. For now, you can check out all the cool scenery and dwarf miniatures you may have missed in our regularly updated Karvenheim: The Story So Far post, and don’t forget to sign up on the campaign’s pre-launch page to get an email reminder when it goes live.