We have a date! The Karvenheim: Stonebreaker Dwarf Town Kickstarter campaign will launch on 26th March 2022! With less than two weeks to go we still have a huge amount of 3D printable terrain and miniatures to show you, and today we’re excited to share another of the stretch goals that we hope to unlock pretty early on (fingers crossed!) – Thunderloaf’s Hot Buns, the traditional dwarven bakery with built-in mill. Dwarves don’t mess around when it comes to an efficient chain of production!

The bakery is owned and run by Speltnor Thunderloaf, who’ll be included as a character miniature alongside this awesome terrain piece. Speltnor left his clan of Ironpelt dwarf barbarians in search of a better life in Galberand's more temperate regions to the south. There he discovered the sprawling mountainside settlement of Karvenheim, and took to the cushy life of his more civilised Stonebreaker kin like a duck to water.

In particular, Speltnor developed a passion for traditional dwarf bread and pastries - a practically non-existent commodity in the harsh, frozen lands of his birth, where undercooked mammoth meat is the more common staple. The texture and flavour were a revelation, but Speltnor excelled in the art of baking too, ultimately surpassing the master bakers of his adoptive home and rising to take the thirteenth of a dozen council seats in the Karvenheim Union of Bakers. 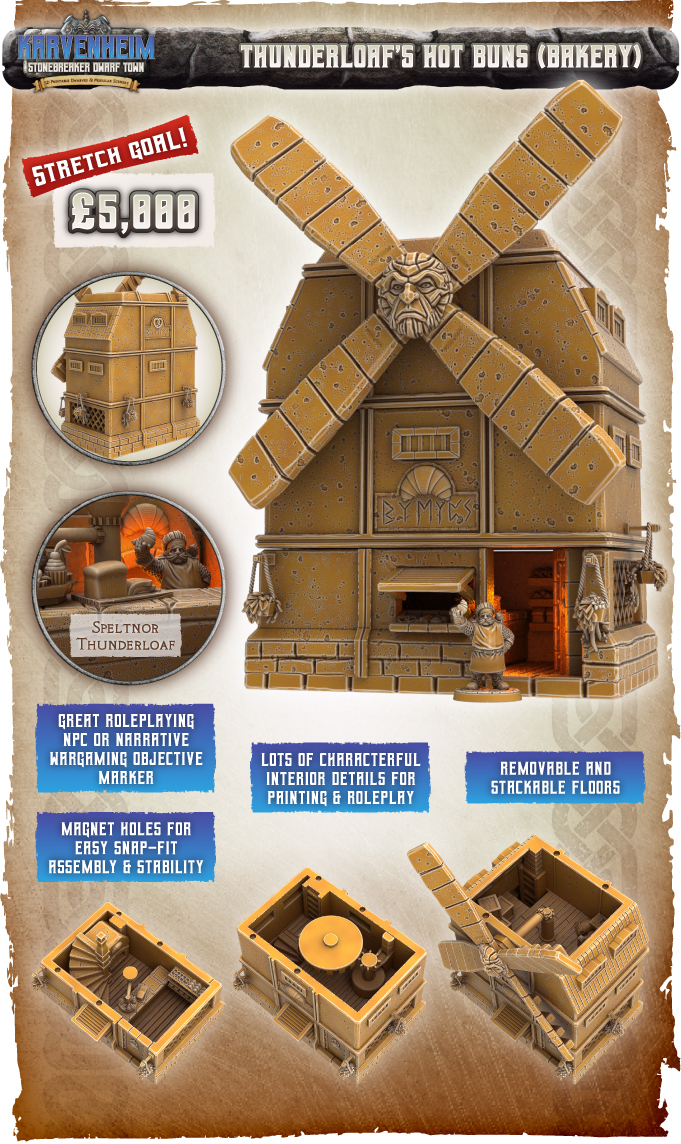 Unfortunately Speltnor's northern blood means that he suffers from a terrible gluten intolerance, giving him legendarily destructive flatulence whenever he samples his own scrumptious creations. This cruel irony has earned Speltnor the name 'Thunderloaf' and, though originally intended as a jibe, this master baker has proudly adopted the epithet as his own.

With consuming baked goods being such a risky business, Speltnor has come to rely on his pet rat ‘Countess Snouty’ as his taste-tester, claiming to understand the rodent’s excitable squeaking and insisting that she’s never been wrong yet. Given the high esteem in which the quality of Thunderloaf’s fare is held, it’s just possible that he’s not completely mad.

Check out all the cool scenery and dwarf miniatures you may have missed in our regularly updated Karvenheim: The Story So Far post, and don’t forget to sign up on the campaign’s pre-launch page to get an email reminder when it goes live.