At last it’s time to reveal the final modular terrain piece that makes up the Karvenheim campaign’s core collection – and we’ve save the biggest and best ‘til last! Behold, the utterly mind-blowing Grand Bhazilika of Karvenheim!

This vast structure will make an incredible centrepiece for your tabletop, just as it dominates the centre of the dwarf settlement of Karvenheim itself. Like every structure in the town, the Grand Bhazilika is carved from the hallowed rock of the Stonebreaker dwarves’ former mountain kingdom, and represents the seat of power and authority within the settlement. There really is a seat too – the Throne of Stone, left symbolically empty as a constant reminder that no true dwarf king can claim to rule the lands above the ground. In latter days the towering edifice is just as likely to be used for feasting and drinking as for civic matters, earning it the nickname ‘The Quaffedral’.

There are so many details both on and inside this terrain piece we don’t even know where to begin (and there’ll be even more interior detail if we hit our social stretch goals)! Some of our favourites are the intricately carved standing stones that border the main hall, the cast-iron bells that stare out defiantly from the towers and the massive axe above the entryway that appears to have actually been lodged in the side of the building by some massive, unseen hand. The potential as an evocative setting for wargaming and roleplaying scenarios is off the charts!

And if you’re planning on backing the Kickstarter campaign but are worried that this beast will be too big for you to print – don’t be! The Grand Bhazilika is specifically designed so that each of its components will fit on a 200mm x 200mm print bed. Then you can either glue everything together or magnetise it using the holes we’ve conveniently included. 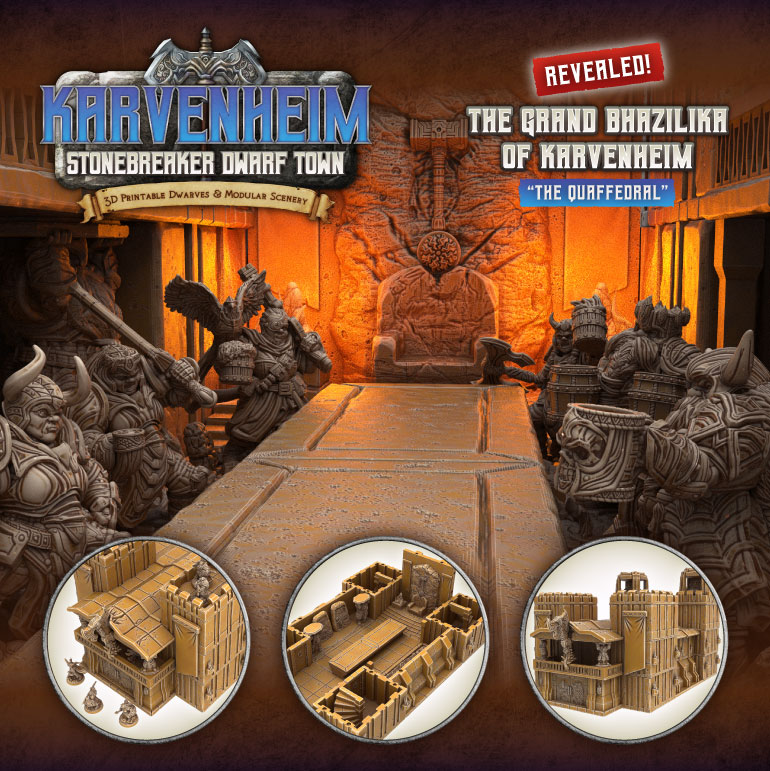 With the entirety of the core dwarf army and town terrain sets now out there for all to see, it’s time to see how it all looks out here in the real world – printed, painted and assembled. If you think these renders look great, just wait until you see the real deal – we’ll see you back here next week!