We’re gradually building up to the launch of the Gnomes of Greenwood Kickstarter campaign*, our first to be centred around a full-blown 5e-compatible campaign book. There’ll be a collection of fantastic miniatures too of course, but this time around we’re specifically designing them to represent the heroes, characters, monsters and villains that you and your party can expect to encounter on your tabletop adventures within the Greenwood.

We talked a little in our previous post about what the campaign sourcebook will contain – a complete tabletop roleplaying adventure, side quests, character sheets, stat blocks and the like – but today we want to focus in on the lore that underpins this gnome-tastic new setting. It’s time for our first tentative visit to the Greenwood!

On the continent of Galberand, north of the vast, primordial forest known as the Beastweald** lies a broad green land of hills and woodlands known as the Greenwood. The region is perhaps more tame than the Beastweald, but more ancient – a vibrant landscape where strange and dangerous creatures roam and settlements are scattered amongst patches of wilderness. The Greenwood is the ancestral home of the gnomes of Galberand, and their villages can be found throughout the wood. 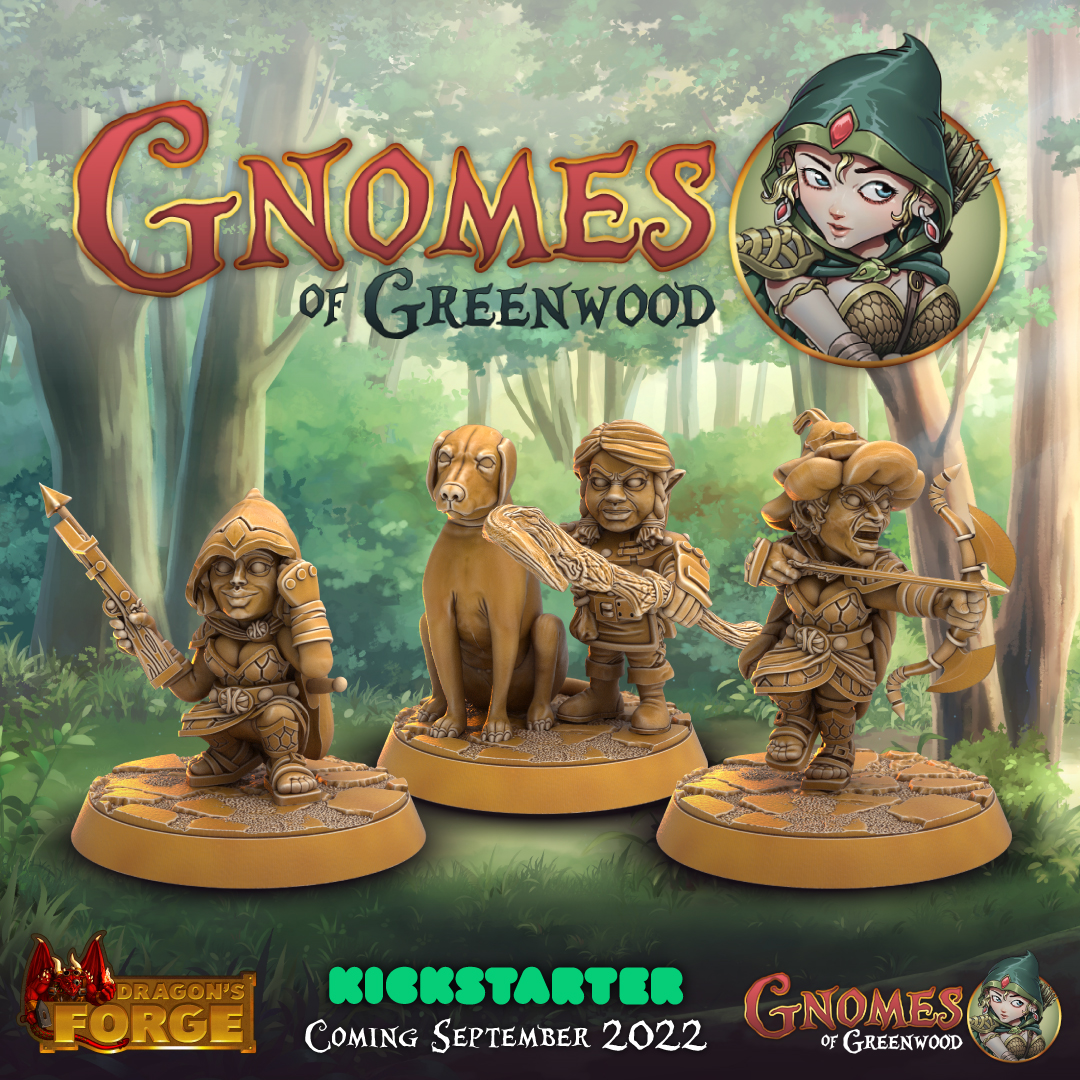 The gnomes that reside here are not fond of cities. Wildling Hall is by far their largest settlement, and whilst many smaller villages and hamlets can be found throughout the Greenwood, towns are a rarity. There are only five settlements large enough to be called such; Cogton, Wuddgate, Whispwell, Stone Pass and Scalegate. Each was established by outsiders, though always with the blessing of the Hazel Queen, principally as points of trade between the Greenwood and neighbouring lands. Gnomes who find their interests drawn away from nature, toward metal and cogs and clockwork, tend to gravitate toward the border towns or even as far as cities in new lands.

In the centre of the Greenwood stands Wildling Hall, the royal seat and palace of the Hazel Queen. The palace is formed by an ancient and giant hazel tree, and all over the great tree grow equally vast mushrooms. Hollows within the body of both the tree and mushrooms form the rooms, halls, corridors and passages of the palace, and each seems to have been grown rather than carved or made. It is even said that Wildling Hall was created by Elmindreda Wildlight, the first Hazel Queen, in aeons past.

Who is the Hazel Queen exactly, and how does she factor into your tabletop adventure? We’ll be revealing lots more lore in the weeks ahead, including a closer look at some of the personalities, places of interest and dangers that populate these lands. Spoiler alert: things aren’t nearly so wholesome and rosy as they may seem. Something foul is lurking in the Greenwood…

Don’t miss the Gnomes of Greenwood 5e compatible campaign book and miniatures collection – sign up on the pre-launch page to be alerted by email when the campaign goes live!

*If the reveals aren’t coming quickly enough for you, bear in mind that ‘a snail’s pace’ is actually pretty fast if you’re a gnome.

**Hey look, it’s connected to the location from our previous campaign, Rangers of the Beastweald! Don’t you just love a crossover?